To mark International Women's Day 2016, Léargas Communications Officer Charis Hughes (pictured above right at an IAESTE conference in Jordan) considers the importance of the international perspective to women's advancement.

The theme for this year’s International Women’s Day, marked all over the world on today 8 March, is "Planet 50-50 by 2030: Step It Up for Gender Equality". The campaign highlights the fifth UN Sustainable Development Goal agreed last year: ‘Achieve gender equality and empower all women and girls’. Depressingly, there’s no shortage of evidence of how much this goal is needed, or of how much all countries will have to ‘step up’ to achieve it. Gender-based violence continues to plague the world; women are chronically under-represented in government and positions of power; and the pay gap persists - women still earn 16% less per hour than men in the EU. So while there have been huge advances since the UN first observed the day in 1977, it’s not just an occasion to honour those who fought so hard for women to win control of their own lives and choices. It also encourages us to continue their tradition. 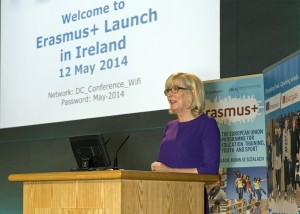 This is where the first word in ‘International Women’s Day’ becomes particularly significant. While ‘international’ obviously indicates that the day is celebrated all over the world, it also carries other meanings. It emphasises solidarity between women, no matter their nation, and shows the strength that can be drawn from this connection. In this week’s edition of The Irish Times’ Women’s Podcast, European Ombudsman Emily O’Reilly (and keynote speaker at our 2014 launch of Erasmus+) put it this way: “Two years before I did the Leaving Cert, women still had to leave their jobs in certain areas upon marriage, we didn’t have equal pay and so on. To me, joining the EU was a huge liberating force for Irish women. […] I think we owe it to [our mothers and grandmothers] and we owe it to our daughters, who may not be as familiar with that, to take time out to recognise not just the generations before us, but also take a look across the world and see the way that women are still treated in so many societies … be they used as slaves in some countries or denied basic rights in others.” This international element has always influenced the women’s movement, from Irish women boarding the 1970s ‘contraceptive trains’ to Belfast to protest the law prohibiting their sale in the Republic of Ireland, to the ongoing global fight against female genital mutilation.

For my part, I feel ‘international’ also has significance on a smaller, more personal scale. Like the majority of Irish people, my primary education came almost entirely from women (according to the CSO 2013 statistics, women make up almost 75% of those working in education). I was particularly fortunate to be taught by women who always looked ‘across the world to see the way that women were treated’, and brought that home to their own students. I have very clear memories of one woman returning from months spent teaching at a rural school in India, amazing us with the tendrils of henna tattoos creeping up her ankles and even more with the stories of how different every aspect of life there was. Children our age worked all day; girls were often married young; and the prospect of anyone completing their education to the level we expected for ourselves was low.

These differences remained theoretical for me until our class completed a cross-curricular project on Ancient Egypt shortly afterwards. At the end of the project we recreated an Egyptian scene in the school backyard, and somehow standing in my sheet robe and cardboard jewels while waiting for permission to enter the underworld brought it home to me what all this meant, and what our teacher had tried to explain about India. There was another way of doing everything. Not just of dressing or speaking or building, but of living in and thinking about the whole world. Ways that seemed strange to me were perfectly normal to somebody else. 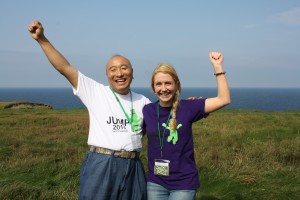 This interest in different ways of seeing the world ultimately led to my working for the IAESTE programme in Léargas. IAESTE arranges practical work experience for students of Engineering, IT and Science but does so by exchanging traineeships between countries, so that students from Ireland have the chance to work and live in nearly 90 countries across the world. Although those fields are traditionally male-dominated, a huge number of women participate in the programme. Time and again I would meet young, independent women who were endlessly curious about the world and willing to embrace completely different ways of life. Many of them were also from parts of the world where being an independent woman is often presented as almost impossible, including Pakistan, Iran and Yemen. Meeting and working with these women challenged my own view of their societies, and their curiosity about my world led me to understand that my own society could be just as strange to them.

This point is consistently underscored by the programmes we work on in Léargas. Erasmus+ is based on the idea that countries can learn from each other, by exchanging good practice and bringing their different strengths to strategic partnerships. eTwinning encourages schools across Europe to link with each other, and bring pupils into direct contact with those who speak different languages and see things a different way. Causeway attempts to break down the barriers between Great Britain and Ireland by bringing young people together.

For me, understanding that there is another way of looking at things is what true international perspective is all about. It doesn’t even require a collection of passport stamps or boarding cards: after all, I’m fairly sure my primary school teacher had never visited Ancient Egypt. Instead it’s a way of regarding the world, of becoming intrigued by differences and learning from them. It’s about questioning the way things are and sometimes challenging them. On a day like today, we might consider what practices we now see as normal that later generations will consider just as baffling as the Civil Service marriage bar. What behaviour of our own might other countries find baffling? And how can we work to achieve change? Embracing that perspective is, I feel, one sure path to achieving that fifth goal and ultimately empowering all women and girls.

Images by Charis Hughes. We welcome contributions to 'Insights' at comms@leargas.ie.