Lessons from the Adults Learning Maths Conference: "Maths is for Everyone"

Noel Colleran qualified as a teacher of Mathematics and History in 1983 and spent some time teaching abroad before returning to begin an education career supporting young adults attending the ‘second chance’ service, Youthreach. These experiences convinced Noel that relevant education transforms lives, and to prepare himself to make a more valuable contribution to his students he became a ‘formal’ student himself again in the late '90s. Noel completed a PhD in 2002 and says the most striking insight from his research was a conviction that all students, irrespective of lived experiences, have the potential to reach the highest levels of educational qualifications. It’s simply a question of providing an appropriate learning environment - one that is relevant to each individual.

As Principal of Templemore College of Further Education, Noel now has the chance to cultivate this ambition among staff and students. In this post, he reflects on the recent conference he attended, funded by Erasmus+, on Adults Learning Mathematics. A link to Noel's paper delivered at the conference is included.

It had been seven years since I had attended an Adult Learning Maths (ALM) conference. That time, in 2011, it was held in the Institute of Technology Tallaght; in 2017, a more exotic location, Rotterdam in the Netherlands. I was looking forward to meeting with friends of old from Ireland, the Netherlands, the US, Denmark, the UK, Sweden and elsewhere. There is something special about a community on the edge: teachers of the highly revered ‘academy of mathematics’ working on the margins with adults struggling with ‘sums’. Not a very glamorous, and some might say, misguided brood. However, we sustain ourselves with the conviction that mathematics is for everyone and while some of us have made it to the inner circle, all who attended the Conference are encumbered with the democratic conviction that there is a mathematics for all that underpins self-cultivation in all areas of living and making a living.

Old and new in Rotterdam

Anyways, as always when meeting good friends after some time apart--and with the initial chit-chat over--we were back into the self-conscripted battle of making mathematics accessible to as many adults in as many contexts as possible.  And this, when you think about it, can prove much more challenging than teaching honours maths to a class of Leaving Cert. students or lecturing calculus to third and fourth year degree students in higher education.

Catching up with a valued American colleague

I heard many interesting presentations, and got engaged in numerous discussions about the present standing of the field of Adults Learning Mathematics (ALM). Members of ALM, because they are passionate about the ‘cause’, hold little back when it comes to presenting the case for more egalitarian education and particularly when it comes to mathematics for all.

The research for my PhD centred on the challenge of making adult students more aware of their own ‘commonsense’ mathematics as the basis for developing an understanding of more sophisticated and challenging mathematical concepts. I am satisfied that all of us have the capacity, with appropriate academic and emotional nurturing, to become very good at mathematics. This was the trajectory that brought me to focus on the question of innate mathematical abilities. The culmination of this work is the paper I presented in Rotterdam entitled ‘Exploring the genealogy of the concept of 'innate mathematical ability' and its potential for an egalitarian approach to mathematics education’.

In the first instance, the paper points out that recent work by a number of researchers has argued that the capacity for mathematical thinking is innate to human intelligence. Much of the evidence for this conclusion is based on findings in fields as diverse as linguistics, genetics, evolution, archaeology, psychology, and philosophy. This paper argues that the genealogy for this development is sourced in the philosophy of the Enlightenment, particularly the work of Immanuel Kant. Kant’s seminal idea suggests that human intelligence had a natural and necessary capacity for mathematical thinking in the forms of space and time. This paper explores the ideas of Immanuel Kant regarding space and time, particularly his views that the intuition of space provides the source for geometry while the intuition of time provides the source for numbers. A limited, yet sufficient, evaluation of recent relevant literature will be employed to illustrate that ‘new insights’ regarding innate mathematics ability can be ‘genealogically’ traced to the work of Immanuel Kant. With an acknowledgement of this ‘initial state’ regarding universal mathematics ability, an egalitarian perspective regarding students’ expectations and achievements in mathematics is in view.

Returning to my first ALM in seven years provided a sense of belonging that was nurturing for the ‘egalitarian mathematics’ soul. Members of ALM will continue, somewhat like a mole, burrowing away under the surface, supporting the work of practitioners, researchers, and both; ready to emerge when the cause of ‘mathematics for all’ is under attack. 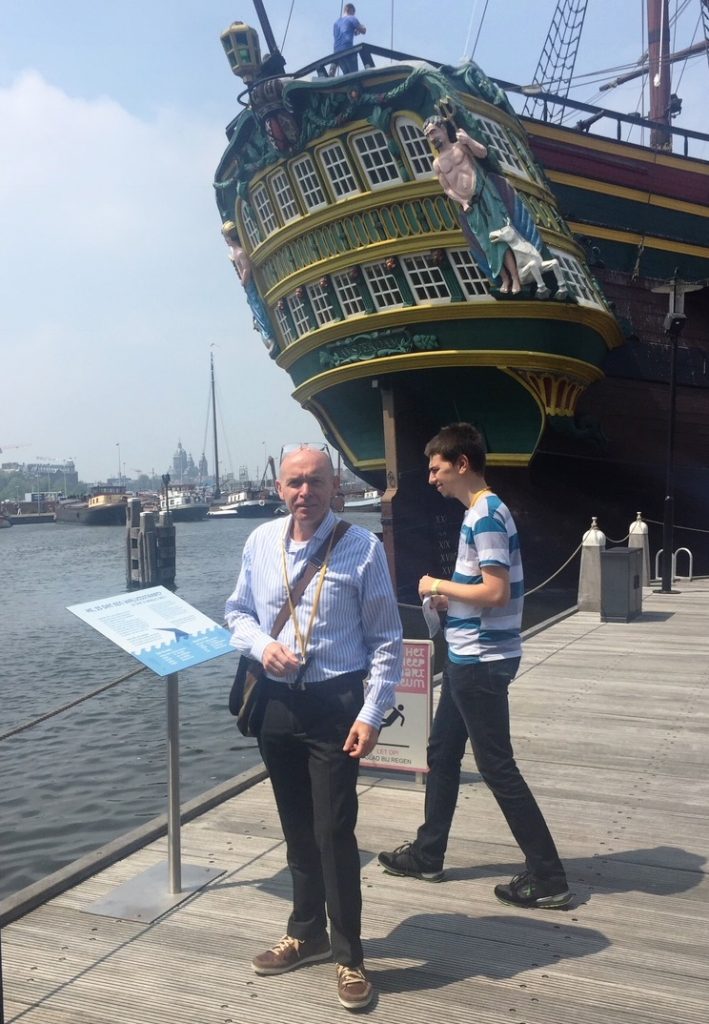 At the Amsterdam Maritime Museum

Top image by Shayak Sen used under Creative Commons licence. All other images courtesy of Noel Colleran.We welcome contributions to 'Insights' at comms@leargas.ie.