In 2017 Léargas held a school competition to celebrate the European Day of Languages on 26 September. 'My Dream Job in...' was held in collaboration with Euroguidance Ireland from the National Centre for Guidance in Education. We invited students, with the help of their language teacher and guidance counsellor, to apply for their dream job in a country where the language they are learning is spoken. Pupils composed a cover letter and Europass CV in a language other than English, and their teachers selected one entry per class to submit.

The senior cycle winners were Gaelcholáiste Chiarraí in Tralee, Co. Kerry.  Transition Year student Ciarán O’Donnchú composed the winning application for his dream job as a journalist in France. Ciarán went above and beyond the competition brief by submitting two journalistic articles in French,  impressing the judges with the sophistication and style of the French he used. As Senior Cycle winner, Ciarán was given the opportunity to explore his chosen career path during a visit to Paris. The trip was organised by Ciarán’s French Teacher, Honor Nic Gloinn, with support and guidance from Euroguidance Ireland. Ciarán and six of his classmates had the opportunity to visit Paris, during which they visited the offices of Le Monde newspaper, explored the culture, history and culinary delights of the city, and of course put their French language skills to good use!

What started as a normal Wednesday morning soon turned into a day of great celebrations. The transition year French class, as well as the whole of Gaelcholáiste Chiarraí, found out that one of its students Ciarán O’Donnchú had won the 2017 European Day of Languages competition! When our teacher and principal told us this wonderful news we all rejoiced...and started plotting and planning our dream trip to Paris straight away!

Monday 14 May: Grand Hotels and a Cruise on La Seine, by Seán and Dean

After weeks of excitement and a long day of travelling, we finally reached our hotel near Montparnasse at 5p.m. The hotel was a grand old building with a stone façade. After we had unpacked we headed to an Italian restaurant recommended to us by the hotel receptionist, where we were treated to one of the best pizzas we’ve ever had. After that we promptly headed, via the Metro, to la Seine where we enjoyed a delightful cruise as dusk slowly meandered its way into darkness. After seeing Paris lit up in all its beauty we gladly returned to the hotel to get some much-needed rest before the following day’s activities!

Tuesday 15 May: Museums and Munchies, by Clodagh and Anna

After the persistent drizzle of the first evening, we were all delighted when we awoke to the sight of the sun beaming its rays on the city. In the morning we visited the Musée d'Orsay. We got to see some amazing art work by famous artists like Van Gogh and Monet. After the museum we walked along the promenade to the Jardin des Tuileries where we got to see the Louvre Museum. We also went on the ferris wheel to witness the great views Paris has to offer, and devoured some churros and crêpes. Basking in the glorious sunshine, we made our way along the iconic Champs Elysees towards the Arc de Triomphe.

After that we went to visit the Sacre Coeur Basilica in Montmartre. We were amazed by the peaceful ambiance of our surroundings as it was so different to the hustle and bustle of inner city Paris. Later that evening we visited the Eiffel Tower. This was definitely one of the highlights of our trip. The views from the summit were spectacular. That night we took the metro back to the hotel and stopped in the mini market on the way which was becoming a habit for us. After being on the go for over 13 hours, walking 25km in the process, it is fair to say that nobody had a problem sleeping upon returning to the hotel! 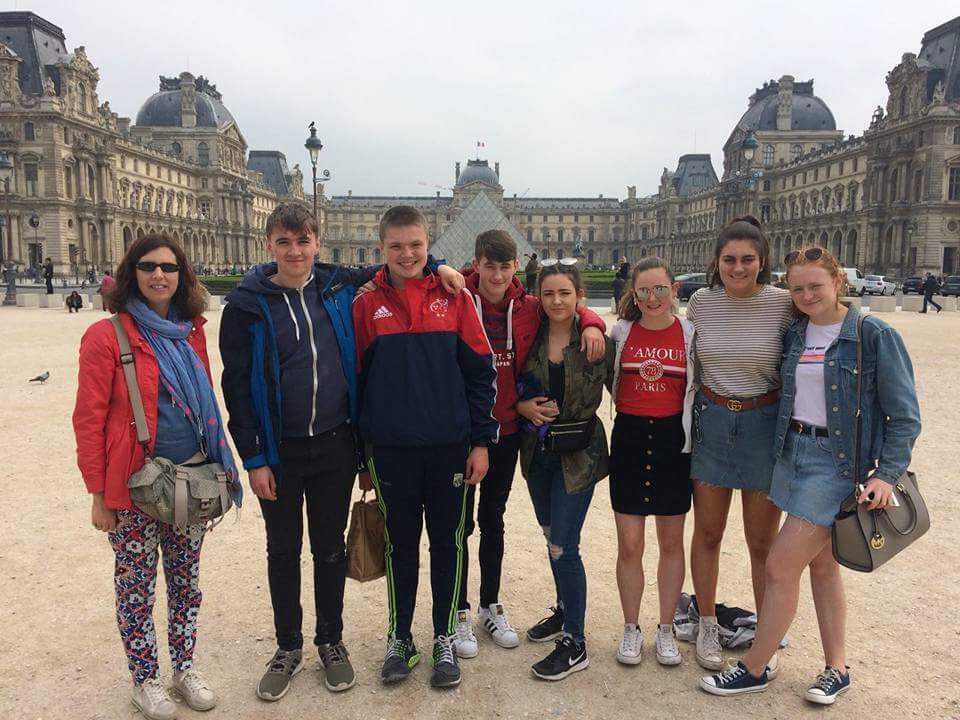 Wednesday 16 May: Glimpses of a Dream Job, by Ciarán

Today we had the unique opportunity to visit Le Monde, one of the most renowned newspapers in the world. At Le Monde we met journalist Claire Ané, who gave us an insightful tour of how the newspaper operates. At the moment they are trying to make their brand more popular with young readers by creating articles which are easier to read and posting them on Snapchat. We got the chance to see the offices where the content for the paper is created and sit in on a meeting where the journalists discussed the followings day's edition.

This was a lively meeting which in places was tough to comprehend as we had never heard French spoken in such a quick and fluent manner. The journalists spoke about the main stories that were to be covered for the following day’s paper as well as jostling for more column inches for stories from their sector. Afterwards Claire summarised the content of the meeting as well as offering us the chance to ask any questions about journalism. 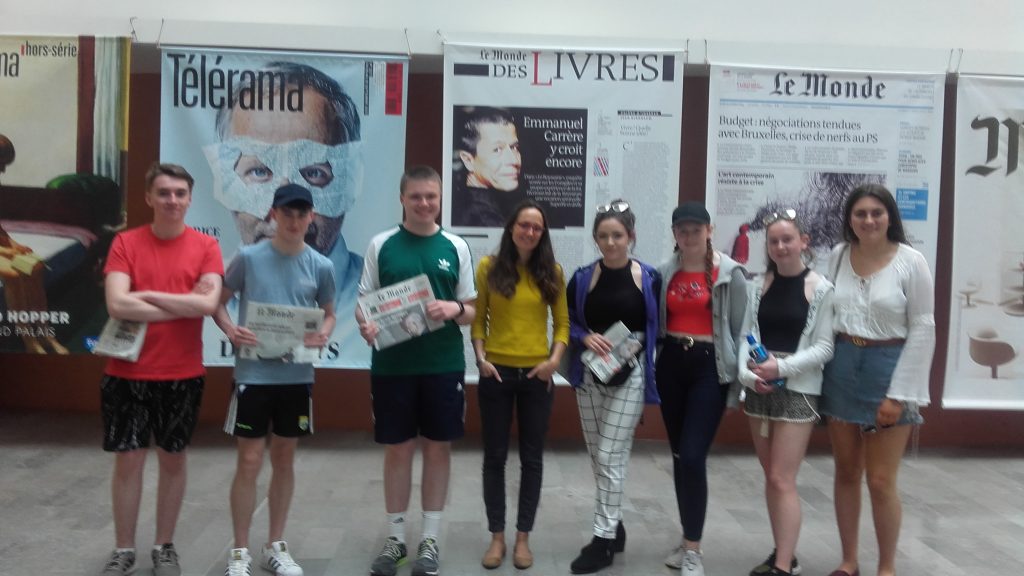 It was a fantastic experience to get the opportunity to see how Le Monde operates on a daily basis. It was without doubt one of the highlights of a truly memorable trip and after this I would certainly consider journalism as a future career path.

Wednesday 16 May: Culture and Comestibles, by Bríd and Leah

After visiting Le Monde, we made our way to one of the many local boulangeries to get a true taste of French cuisine. Then we hastily made our way to Notre Dame Cathedral where some experienced the magnificent architecture of the cathedral while others where more taken by the local Fête du Pain (bread festival!). We then went to the modern art museum Centre Georges Pompidou which proved popular with everyone. Afterwards we had some much-needed retail therapy in the Forum Des Halles shopping centre, before enjoying a delicious meal while reminiscing on what had been a special few days.

Final thoughts: Experience of a Lifetime, by Ciarán

After enjoying a peaceful walk on our final morning in le Jardin de Montsouris, it was time to return home after a memorable few days. It was incredible to receive this opportunity and I would like to thank Léargas and Euroguidance for organising a brilliant competition with a truly spectacular prize. My personal highlights from our trip are the cruise on the Seine as well as visiting the Sacre Coeur.

It was an experience of a lifetime and all seven of us along with the teachers really bonded throughout. The small group allowed us to frequently use the metro and we got a true taste of Parisian life and culture. I would like to thank my French teacher Iníon Nic Gloinn for informing me about the competition and helping me plan my entry, as well as my career guidance teacher Iníon Ní Mhuircheartaigh. Also, thanks again to Iníon Nic Gloinn and Bean Uí Mhuiris for travelling with us and making sure everything went to plan. It was a unique opportunity and a trip that none of us will ever forget!

This trip was a fantastic opportunity to practice the language skills the students acquired in class. Students were encouraged to order their meals through French and to use the language as much as possible during our time in Paris. As a teacher it was a pleasure to see the students reading advertisements in the metro and verifying the meaning with us. The enthusiasm and willingness of the students to engage in all activities was truly admirable. Our visit to Le Monde was a very special part of the trip. We are most grateful to Léargas and Euroguidance for this amazing prize. I would like to reiterate Ciarán’s thanks to Bean Uí Mhuiris and Iníon Ní Mhuircheartaigh. My thanks also to the management, staff, and Parents' Council of Gaelcholáiste Chiarraí for their help in organising the trip. On our return Ciarán received a special plaque for his achievement and he also won Transition Year Student of the Year at our school awards night! Bravo Ciarán! 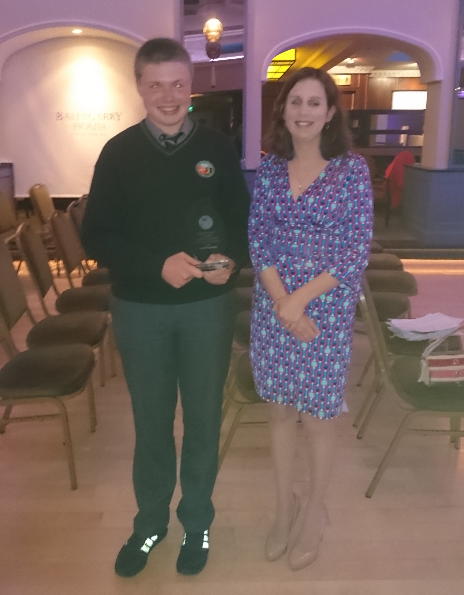 Images courtesy of the staff and students of Gaelcholáiste Chiarraí. We welcome contributions to Insights at comms@leargas.ie.