Languages for Understanding: Entries to the EDL 2016 'Climate Change In...' Competition

Every year Léargas holds a schools competition to celebrate the European Day of Languages on 26 September. This year we asked language teachers to work with Geography teachers to help pupils consider climate change in a particular country: how it’s viewed there, what its effects are, and what solutions are possible. Pupils had to prepare a two-page report, with pictures, in the language spoken in the country they chose. Our Languages Coordinator Nellie Tattersall reviewed all the entries and writes here about the themes that emerged.

“We had a fantastic response to our European Day of Languages competition this year. Several thousand pupils across the country, from Donegal to Kerry and Sligo to Dublin, looked at the incredibly serious topic of climate change. It’s heartening that our young people are aware of how serious it is, and are positively embracing the multitude of solutions available.

Climate Change Around the World

Many pupils looked at countries in Europe, including Ireland, France, Spain, Germany, Austria, Switzerland and Italy. Others dealt with countries farther afield where French and Spanish are spoken, such as Canada, Bolivia, Mexico, Peru, Panama, Argentina, Honduras, Mali, Egypt and Cameroon. Some pupils looked at the devastating effects climate change is having on small islands such as Madagascar, Réunion, Seychelles and lastly—and unfortunately the most affected by climate change-- Haiti. These islands are disappearing under rising water levels, and struggling with both droughts and floods. Within one generation some of the islands have gone from lush green vegetation, to struggling to produce cactus fruits. Lots of pupils commented that this is grossly unfair, as the islanders have contributed little to climate change and yet have had to suffer the worst effects.

This competition gave pupils a true linguistic challenge. While they wouldn’t necessarily have dealt with climate change in their regular language class, they embraced the subject and did some fantastic work. Maybe this will have an impact on some of them; they might not have considered studying a science or a social science in France, Germany or Spain, but this is a realistic option for lots of pupils!

Reading the entries it became clear that there are a multitude of solutions to climate change, and we could fix this problem tomorrow if we wanted to. The technology exists, the renewable resources are sitting there waiting to be harnessed, and the answer is to work on all of these solutions.

Many pupils talked about reducing our dependency on plastics, understanding that plastic doesn’t decompose but simply breaks down into smaller and smaller elements and ultimately is ingested by sea animals. Solar panels, wind farms and wave energy were all talked about. In terms of construction, insulation and triple glazing were mentioned a lot, though curiously there was no mention of passive housing (comfortable houses with no central heating systems)! Air pollution was a common topic, with pupils looking at the rise of respiratory and other diseases, and the ‘no car days’ that many cities around the world hold. On these days private cars are banned while trams, buses and trains are free. This encourages people to try out different forms of public transport or cycling. Even one ‘no car’ day can make a difference…imagine if this was a more permanent fixture in our cities! Cycling was mentioned often, and it’s a great pity neither Danish nor Dutch are on offer in Irish schools or somebody would doubtless have dealt with Copenhagen or Amsterdam, where city councils have provided fantastic facilities for cyclists that have changed people’s mindsets and where cargo bikes have become commonplace.

With all these fascinating entries, the judges had an extremely difficult task, with entries varying from Fifth Class primary to Sixth Year secondary. The judges were keen that all three parts of the competition question—how climate change is viewed, what the impacts are and what the solutions are—were dealt with thoroughly. Pictures, as we all know, can say a lot and relevant pictures were important. There needed to be solid information and pupils had to make the most of their two-page maximum! 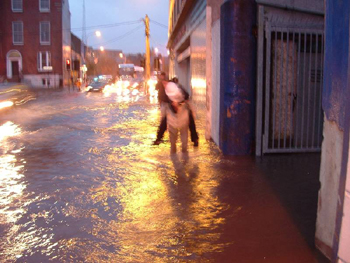 After much deliberation, the judges chose the winner and also awarded three commendations. These went to:

We’re very happy to announce that the overall winners are Third Years at Christian Brothers College, Cork! Their Irish-language entry looked at climate change here at home. The winners certainly got things off to an early start: the competition details are released to teachers and published on our website at the beginning of the summer term, and the project was started in May 2016. The pupils—then in Second Year—decided to visit Wisetek, a recycling plant in Little Island, Cork. They invited their local TD, Michael McGrath, to the school in early September so they could interview him about the Irish government’s plans for tackling climate change. Later in September, they contacted and visited Professor John O’Halloran, Vice-President for Teaching and Learning at UCC and a member of the judging panel for the BT Young Scientist Award, and interviewed him in relation to their project. While at UCC they conducted a survey among students to see how climate change was viewed in Ireland. The effort, enthusiasm, research, hard work and good presentation that went into their winning entry was clear.

The prize is for one language and one geography teacher from the school to take a small group of pupils on an environmental fieldtrip of their choice in a country where the language they are learning is spoken. We greatly look forward to hearing how the winners will combine Irish and learning about the solutions to climate change in Ireland. Perhaps they’ll visit a project through Cultivate, which offers experiences for students in Cloughjordan Eco Village as Gaeilge.

Sincere thanks to all the pupils and teachers who entered the competition. Please keep an eye on this page for details of next year’s competition, which we’ll announce in early summer 2017."