The European Solidarity Corps brings together young people through volunteering, traineeships or employment to build a more inclusive society. Different types of projects can be funded, including 'Solidarity Projects', which take place here in Ireland and are thought up, developed and put into action by young people themselves.

Dasha Lavrinienko volunteers with Kildare Youth Theatre as a drama facilitator and project manager. She is leading a Solidarity Project called 'The Room: Community Drama' that will use drama to bring asylum seekers and local young people together. Her project will run for eight months and received a grant of €5928. Here she describes how the project got off the ground successfully after a shaky start and outlines some of the practical details.

Born out of curiosity

The Room: Community Drama project was born out of curiosity: ‘Who are the asylum seekers who live in the hotel that's just 20 metres from our studio?’ We passed by the hotel every day, and eventually even said hi to some people there, but we really wanted more: we wanted to get to know them, learn from them and give something in return.

We saw that there is a big lack of information about asylum seekers and refugees and in fact, no place or time where locals and asylum seekers would be able to interact with each other.
So, we decided to create this space and as we do drama, we thought there is nothing better than that!

Funding and support, but...

We applied for--and received--European Solidarity Corps funding and we started to investigate how to recruit people to our workshops. We had a meeting with the asylum seekers support group but the words ‘drama’ and ‘theatre’ only caused panic and weren't helping at all! Most people imagined a script, a stage, lightning and a thousand eyes watching you (a bit intimidating, isn’t it?). It was very difficult to explain what drama is, how it works though games and involves a lot of fun; that it is rather a process than any result. So, as you may imagine, the information didn’t spread and was lost there, in unknowable uncertainty.

We looked for support from local authorities to distribute leaflets, posters, anything that would help us get in touch with residents in direct provision. We didn’t get any help, and we felt we were being annoying with our emails and calls.

What are the needs?

After some time of feeling desperate, one day we saw an acquaintance from the hotel on the street and asked him to the studio for tea and coffee. After a chat he told us that we should think about something more practical. If we were to do workshops, what would they be about? What are the needs of people in direct provision? We realised it had to be something practical, perhaps related to English learning through drama, public speaking or job interview skills. At this stage we met a community worker from Eyre Powell (an asylum accommodation centre in Kildare) who was--and is--extremely helpful with our project. We designed a brochure with our new information and immediately eight people signed up for our workshops! 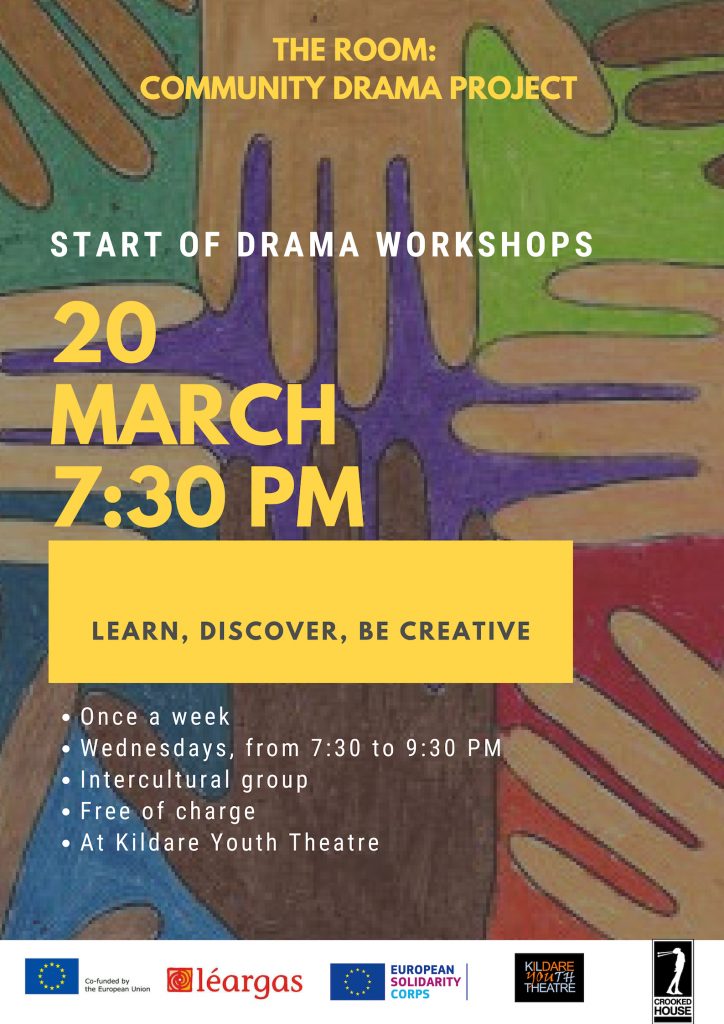 And this is just a start!

Now, some practicalities about project management: we met a few times and we worked out the tasks that would be involved, such as who is going to facilitate the workshops, who is going to take pictures and/or film the journey, who is going to shop for some food and prepare tea before the workshops. We then had to share out all of these tasks (and many more!) Peter Hussey from Crooked House Theatre is a coach for this project and he has given us valuable insight on the programme and the way we could include more Kildare Youth Theatre members in this project. We will be meeting on a monthly basis and Peter will give us support in planning workshops and in any logistical issues that might come up.

If you are interested to bring a project like this to your local community, don’t hesitate to contact us, we will be delighted to share our experience and assist if necessary. And stay tuned! We’ll be posting on our blog soon as well ;).

Solidarity projects take place in-country and are initiated, developed and implemented by young people themselves for a period from two to twelve months.  They provide opportunities for groups of young people (minimum five) who are 18-30 years old, to express solidarity and commit to bring positive change in their local community. You can find out more on the About page of the European Solidarity Corps website, or contact Suzanne or Noeleen if you'd like to know more.

Crooked House Theatre Company is a theatre and arts organisation based in Newbridge, County Kildare, working with artists, actors, and non-actors in a range of settings to develop new performance material. They work mainly with young and emerging performers, supporting a vibrant youth organization and a well developed outreach and educational programme.
They collaborate with a network of European theatres and youth-theatres, mostly though Erasmus+ projects, performances and exchanges across the continent.

Images courtesy of Dasha Lavrinienko. We welcome contributions to 'Insights' at comms@leargas.ie.