All-neu experiences for a VET trainee in Berlin 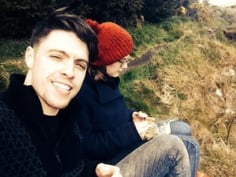 Martin Larkin studied Festival Management and Sound Production at Sound Training College in Temple Bar, Dublin and graduated in 2013. Towards the end of his training he realised he wanted to further his skills by working in another country, and completed a 22-week Vocational and Educational Training work placement in Berlin, Germany under the EU Leonardo da Vinci Programme. While that programme concluded in 2013, Erasmus+ Key Action 1 offers similar opportunities for VET organisations to send their learners abroad for vocational placements lasting from two weeks to 12 months.

“My time studying Festival Management and Sound Production at Sound Training College (STC) gave me the opportunity to work alongside some of the top people in the industry in Ireland. I gained valuable experience, from working on the frontline in the production team of Electric Picnic to organising music workshops at the Life Festival.

Coming near the end of my time in STC I was eager to progress further in the Event Management field, but I also wanted to fulfil my dream of living in another country and learning a new language.

This led me to research EU funding for completing work experience abroad. I had a number of friends who went down the traditional route of studying and became fluent in foreign languages by taking part in the Higher Education Erasmus programme. That option was not open to me, as I did not study in a University. So when I discovered the Leonardo da Vinci programme I was ecstatic, as I too had the opportunity to further my skills in a foreign country. I immediately approached STC’s Director of Education Dr. Brian Carty to suggest making an application.  The College had not applied for the programme before, so it was an amazing support to have the team at Léargas to assist with the application process and address any queries.

A few months later I had completed a language course, packed my bags and was on my way to Germany. We had arranged a placement with Neu West Berlin, a contemporary cultural centre; I worked on the production of all their cultural events. The scope of events was very different to what I was used to, ranging from fashion weeks to film festivals, so it was an interesting experience and one that constantly presented new challenges. For me, the best part was working with a team of creative people from every corner of the globe and learning to overcome cultural differences and focus on the project at hand.

I fell in love with Germany and especially the German language, so when the opportunity presented itself to extend my time there after my placement I naturally welcomed it with open arms. Three years on I am back living in Dublin and getting paid to speak German--something I never thought possible a few years ago! I work in the Dublin offices of a London-based IT company, where I sit on the operations team and am responsible for their German market.

I would like to thank both STC and Léargas for being a tremendous support to me, and for anybody looking to broaden their horizons I would definitely recommend a work placement abroad.”